"Equinox" is a feature length film from Cinema Beyond and New Theater Collective.  This story was originally adapted from the stage by original playwright Eric Reda and screenwriter Jason Denuszek.  It was filmed from late Summer 2004 through early Summer 2005 in Grafton, WI, and Post-Production was completed and the movie released in January 2006.

"Equinox" has a dedicated movie site, with cast and crew information, production stills, and story background. 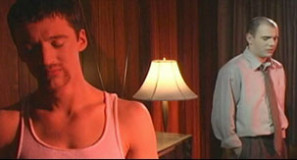